March 27, 2019 Education Comments Off on LACK OF MORAL VALUES IN ADOLESCENTS | BIYANITIMES 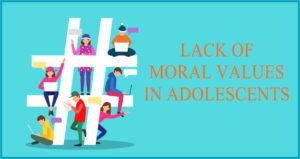 Parents have the greatest influence in a child’s life. Children learn the basic values of behavior and living from their parents. Interestingly enough, punishment for disobeying rules creates only part of moral judgments in children. Children in fact learn by example, and whatever home they are actually living in will shape how they make moral decisions.

When children experience interactions inside and outside the home in which they feel safe and cared for and where anger and hostility are not present, they develop a strong sense of self which develops into a strong moral base. When they see or experience something such as violence that is contrary to their normal way of living, they instinctively know that way of life is wrong. Parents who spend time on discussing the basis of their moral principles and the expectations and rewards of following those moral principles usually do a much better job at teaching their children to hold to the same level of morals as they have.

Outside of parents, teachers, and other role models, schools plays a pivotal part in shaping the morals of the next generation. They place a high value on character traits such as honesty, integrity, and compassion, and teachers who exhibit these attributes will naturally pass them along. Inconsistency and hypocrisy on the part of teachers and parents alike can cause real harm to a child’s moral development. Other role models can influence a child’s life without even knowing they are doing so. The media provides a direct yet sometimes inaccurate link between children and their role models. Many times a role model speaks or acts inappropriately yet a child thinks those actions or words are acceptable simply because someone they look up to has endorsed them. Children need guidance in choosing proper role models that will best shape their moral development.

Children need various forms of social interaction to develop into well-rounded adults. These include interacting with other adults, family members, and other children, older and younger than they. Each interaction will reinforce or challenge a child’s preconceived ideas about what is morally acceptable. Most children want to have a feeling of belonging and quickly learn the social conventions to that will help them fit in. In learning how to get along with others, children learn by trial and error how to adjust their actions to fit the moment.
In nut shell, in order to inculcate moral values among adolescents it should be an ongoing process and should start as soon a child takes birth. Children watch and hear whatever will happen in their surroundings may be in the family of in social set up and say so we have to be careful that we are doing is correct and you don’t mind the same thing from your child. If you are doing or saying something or using a language which you will not like from your children Parents and teachers keep telling them what is wrong and what is right.

There are little eyes upon you and they are watching night and day…..

There are little ears that quickly take in word you say….

There are little hand all eager to do everything you do…..